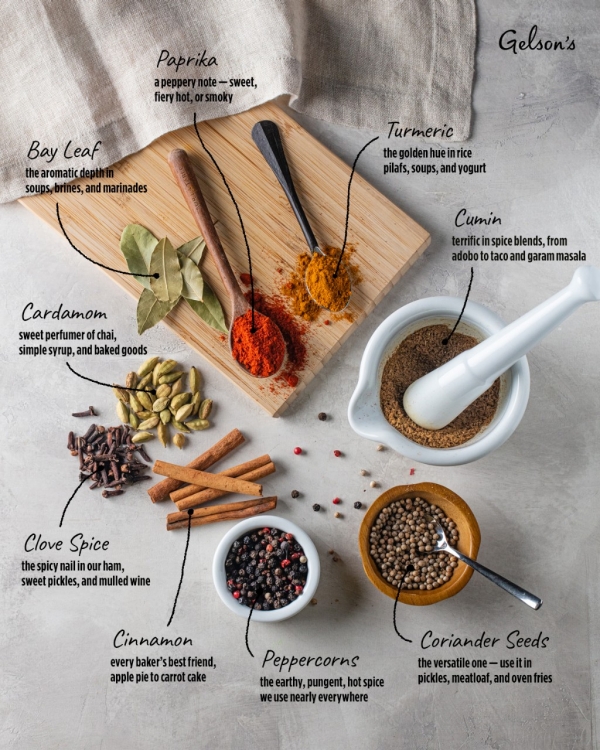 It seems like many of us pick up new spices as we go, so that every fresh cooking adventure adds a little jar of seeds, berries, powders, or leaves to our spice cabinet. That’s a fun way to do it, but if you’re setting up your first kitchen or just venturing into cooking, the onesie-twosie approach can take a while — and leave you thin on the ground when it comes to putting meals together on the fly and creating your own recipes.

This collection includes the basic, entry-level spices no spice cabinet should be without. And by basic, we mean critical: these are the nine spices our chefs reach for every day in their own kitchens. You can get a lot done with them, from making sweet and savory pickles to baking cakes, marinating meat, and garnishing your poached eggs on toast.

Our tip: Whether you’re rebooting your own spice collection or putting together a housewarming gift for a friend or favorite kiddo, check out Gelson’s line of basic spices. We’re so proud of them: They’re sourced by a local SoCal company, and they search the world over to bring us the highest quality spices: garlic from the fields of our very own Central Valley, parsley from the rocky shores of Great Britain, and cinnamon from the cassia trees of Vietnam. Into blends? We’ve got those too!

This sunny, powdered spice is part of the ginger family, and it has a pungent, gingery pepper flavor — a little bitter, a little sweet, a little warming, but not spicy. It’s perhaps best known as a kind of culinary dye: it’s the spice that gives everything from yellow curries to cheddar cheese their brilliant hue.

You can make a simple curry blend with the spices in this collection, including turmeric, hot or smoky paprika, pepper, cloves, cinnamon, coriander, and cumin. We also like to use turmeric to add color and warmth to rice pilafs, yogurt sauces, and soups. And a pat of turmeric butter melted over potatoes or cauliflower is scrumptious.

Bright red, powdered paprika is one of the more complicated spices. It’s made from a variety of red peppers, in a variety of places — mainly Hungary, California, Spain, and Morocco — and it comes in a variety of flavors. For example, Hungary alone produces eight grades of paprika, ranging from delicate to fiery hot. Here, we’ll talk about the three main categories:

Sweet paprika has a mild, sweet pepper flavor, and like turmeric, it’s great for adding color to food — sprinkle it on deviled eggs and hummus. It’s also a nice add in peppery spice blends, where its sweetness balances out the hotter ground chiles.

Smoked paprika is still sweet, but it leads with a rich, wood-fired flavor. It’s the one we go for when we want to add a smoky note to food — think paella, roasted sweet potatoes, or barbecue sauce — without actually smoking it or going gonzo with liquid smoke.

Hot paprika smells sweet and slightly fruity, but it packs a peppery, spicy punch. It’s the one we use to make zippy spice rubs for pork and beef — and the classic Hungarian dishes, like chicken paprikash.

Bay leaf is an herb masquerading as a spice. It comes off the bay laurel tree and is somewhat notorious for having very little fragrance or flavor in its dry form. Don’t be deceived! In food, it has a distinct and herbaceous flavor — minty and peppery with a hint of pine tree.

Bay leaf is one of the traditional aromatics. Combine it with carrots, celery, and herbs to make a soup stock. Use it in sauces, soups, brines, and marinades, where it will add depth by bringing out the other spices. Remember, a little goes a long way, so just use a leaf or two, and always remove them before serving the dish.

Like turmeric, cardamom is part of the ginger family. You’ll find it ground or as whole black seeds. It also comes in the pod form — with the sticky, black seeds inside it. It’s one of the most aromatic spices and has a lovely vanilla-floral scent and a spicy, mildly sweet, nutty flavor. For all that complexity, it pairs well with big flavors, including ginger, citrus, coffee, and other baking spices.

We sometimes throw cardamom in a coconut curry, it’s the secret ingredient in our meatloaf, and it’s great in lamb dishes, but more often than not, we use it in sweet things. It’s a key ingredient in chai, and it makes a fantastic simple syrup. (Old Fashioneds!) And, it gets baked into everything from crumbles to coffee cakes, baklavas, and candied yams.

If you buy them whole, cloves look like short, reddish-brown nails — they’re dried flower buds from the evergreen clove tree. Cloves also come ground, and you’ll find a little bit of the fiery, sweet, and deeply aromatic spice goes a long way. In fact, too much clove will not only overwhelm your food — it’ll numb your tongue.

Like the rest of the baking spices, cloves straddle savory and sweet. Many of the big, traditional meats get studded with them, like pot roast, baked ham, and corned beef. They’re one of the spices in the classic Chinese five-spice blend and Indian garam masala. They’re also the warm note in mulling spices for wine and apple cider. And we love them in a sweet pickle: cucumbers, watermelon rinds, beets, or eggs.

You know this warm, sweet, aromatic spice — it’s everywhere, all the time. Made from the bark of the cinnamon tree, it comes ground and in rolled-up bark sticks.

Cinnamon turns up in all sorts of baked goods, from apple pie to carrot cake. Cinnamon sugar gives our toast a dessert-y feel, and our donuts a little spice. We use a cinnamon stick to swizzle spiced apple cider and seasonal cocktails, like hot toddies. And on the savory side, we lean on cinnamon for everything from braised short ribs to Moroccan veggie tagines and aromatic rice pilafs.

If we were planning to be stranded on a desert island, the one spice we’d take is pepper. (That’s assuming there’d already be plenty of salt.) Like paprika, pepper is deep: there are black, white, green, pink, and Szechuan peppercorns. Each color has a distinct flavor — or flavors — after all, there are many, many different varieties of black pepper alone.

You can buy them separately, or do as we suggest here, and buy a blend that includes all of them. That way, you get the full breadth of pepper’s flavor: earthy, pungent, hot, piney, sweet, acidic, and creamy. Where do we use this colorful blend? Nearly everywhere.

Coriander seeds are the fruit of the coriander plant, also known as cilantro. They smell a little bit like lemon zest, and they taste like citrus, too, with a nutty-sweet, light-curry spiciness. Coriander is one of the more versatile spices, in part because it plays well with lots of other flavors — pepper, cumin, cardamom, chile peppers, citrus, parsley, dill, thyme, and fennel, to name a few.

We use coriander pretty much every day. It’s one of our go-to pickling spices, and we put it in almost every meat rub we make. Toasted it goes into everything from carne guisada to meatloaf and oven fries to ramen noodles. It’s also good in breads and cakes, where its floral side shines. Our all-time favorite thing to make with it? Moroccan chermoula sauce.

Ground cumin is made from the toasted seeds of the cumin plant, a near relative of parsley. Like many of its fellow curry spices, yellow-brown cumin has an earthy-sweet warmth. There’s a hint of bitter citrus there too. Cumin is hearty yet easy going, a versatility that tends to land it in a lot of spice blends — like chili powder, adobo, sofrito, garam masala, tikka, and taco seasoning.

Given that, it’s not surprising that cumin is good in almost every savory application. It’ll hold its own with a rich meat like lamb, but it won’t overpower a delicate fish or shrimp dish. It brings out the natural sweetness in veggies (think braised carrots or cumin-buttered corn), and it’s awesome with beans — never make chili without it. Cumin also pairs really well with citrus and vinegar, so we use it in dressings, marinades, and salsas.