A Home Cook’s Guide to Vinegars 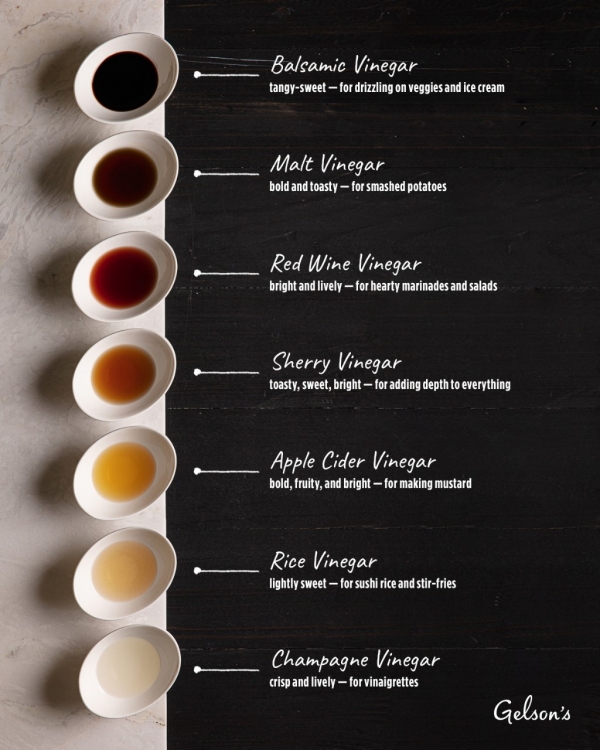 In the annals of recent food television, we found chef and food writer Samin Nosrat’s Netflix series “Salt, Fat, Acid, Heat,” smart, inspiring, and absolutely riveting. If you’ve seen it, you’ll be as thrilled as we are to dig into vinegar — a fantastic source of acid. (If you haven’t seen it, get thee to the television).

In food, vinegar’s main job is to provide contrast: It’s the bright, tangy, or sharp note that cuts through the fat and brings depth to starches. It sits on the other side of the see-saw from sweetness and keeps things balanced. For example, a couple teaspoons of red vinegar add dimension and brilliancy to a pot of savory lentils, and a little white vinegar will make merry with strawberry simple syrup in a shrub cocktail. And a piquant mignonette — vinegar and shallots — will balance out a fresh oyster’s salty brine and rich creaminess.

Of course, vinegar has other jobs in the kitchen too. It’s the stuff you use to pickle cucumber, to make light and airy cakes, to brine turkeys and to clean the windows on occasion.

All in all, vinegar is a super versatile tool, and a fun one to taste and experiment with — there are so many vinegars, and they come in such a broad variety of hues and flavors. This guide will get you started.

Balsamic vinegar comes from the region in and around Modena, Italy. It’s a reduction of white Trebbiano grape must (freshly pressed grapes with their pulp, seeds, and skin). It ages in wooden barrels of graduating sizes, large to small, until it’s glossy, almost black in color, with a pungent sweetness full of rich fruit and tang. The balsamic most of us are more familiar with is aged for 3 to 5 years, but some are barreled for 12 to 100 years — they are so deep, dark, and molasses-y, some people save them for sipping.

Balsamic vinegar makes a lovely vinaigrette, but all that tangy-sweetness really shines in a reduction. You can drizzle it over almost anything — think caprese salads, grilled steaks, and fresh nectarines and ice cream.

Made from malted barley, which is basically un-hopped beer, this vinegar looks like an ale and, at its best, has a pleasantly sharp, roasty malt flavor. It’s famous for being the tangy foil for fish and chips, but there are all sorts of other things you can do with it.

Malt vinegar is the perfect finish on crispy smashed potatoes and rich, meaty dishes, like stuffed cabbage leaves, shepherd’s pie, and the like. Because it’s so bold, it also stands up well against other big flavors. It’s fantastic in spicy marinades, sweet, pungent chutneys, and barbecue sauces. We especially like malt vinegar in a mint relish — it’s delightful spooned over lamb.

Like balsamic, red wine vinegar is made from grapes, but where the former is dark and richly sweet, the latter is bright red, clean, and vivacious. It’s got a serious bite to it.

Red wine vinegar is the one we think of for marinating steaks — it infuses the meat with flavor, and tenderizes it. It’s also our go to for hearty salads, the kind that come with garbanzo beans, black olives, radishes, and salty cheese strewn across them.

Sherry vinegar is produced in the province of Cadiz in southwestern Spain. Its color and flavor vary depending on the grapes used to make it and how long it’s aged — it can spend 6 months to 75 years in oak barrels, and like balsamic, it gets darker, thicker, and sweeter as it ages. Chefs love it for its complexity: it can be nutty and full of toast, rich and raisin-y sweet, or pleasantly bright and sharp. It’s less excessive than balsamic and more generous than red wine vinegar.

You’re probably familiar with sherry vinaigrettes. They’re fantastic, but sherry is also great for cooking. Use it to deglaze the roasting pan and make gravy or pan sauce. And, our favorite: whisk a few tablespoons of it into everything from gazpacho to chimichurri, beef stew, and creamy wild rice soup to add sly depth and character.

Just as you’d suspect, this one is made by crushing and fermenting apples. It has a beautiful golden-red hue, like apple juice, and its flavor can range from delicate and fruity to quite tart and assertive.

We like to use cider vinegar for making homemade mustard. It’s strong and sweet enough to break down mustard seeds, but less hot than, say, red wine vinegar, so it’s not going to blow up your palate. It’s also a nice finishing vinegar: swirl it through your rich lentil stews and sprinkle it over grilled root vegetables.

Rice vinegar is traditionally used in Chinese and Japanese cuisine, but it’s now made in the United States too. It’s pale yellow, a bit cloudy, and it has a soft, lightly sweet flavor — mellow and less acidic than the other vinegars on this list.

Rice wine is so pleasant and delicate, it’s a great way to add a wee bit of acid without stepping on other flavors. Not surprisingly, you’ll find it in a lot of Asian recipes, like sushi rice, stir fries, and dipping sauces. We also like it for quick pickling — think thin slices of cucumber, apple, or onions — and dressing the slightly bitter veggies, like radicchio, Brussels sprouts, and Belgian endive.

This one is made from the fermented juice of Champagne grapes. Like the bubbly, it’s light and crisp, and has a fresh, lively flavor — bright without veering into harsh.

In fact it’s so mellow, that we probably wouldn’t cook with it. But we’ll always choose Champagne over white wine vinegar for making a salad dressing. It doesn’t step on our tender greens or curl our tongues. It’s also the one we use for flavored vinegars: tarragon Champagne vinegar makes a stunning mignonette sauce or homemade mayonnaise.

White vinegar is made from grain-alcohol. It looks like water and tastes very clean, very sharp (punishing, some would say). What it lacks in subtlety, it makes up for in economy; it’s the least expensive vinegar around. Most chefs will tell you to use white vinegar for cleaning: it’s fantastic for descaling coffee pots and mopping floors. It’ll leave your windows streak-free.

We also use it for recipes where the flavor of the vinegar doesn’t matter (boiling eggs and baking, for example), or where a lot of the stuff is required, such as chicken adobo or pickled salmon. Speaking of pickles: If you’ve got a great, big summer pickling project, a gallon jug of bright white vinegar is your friend. It’s not only cheap, it’s utterly characterless — the perfect blank slate for garlic, dill, and pickling spices.