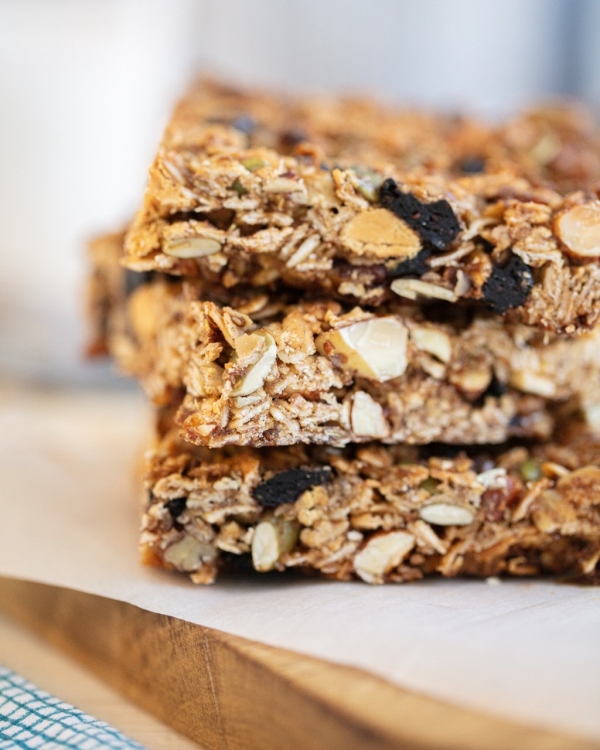 Now these are granola bars! They’re rolled oats, pumpkin seeds, toasted tree nuts, dried blueberries, and mini white chocolate chips held together by maple syrup, vanilla, and honey. They taste naturally sweet, nutty, and lightly salty. There’s a hint of heat, too, thanks to a pinch of cayenne pepper. And the texture is dynamite: something fun around every corner, but in perfect balance — not too crunchy, not too chewy, just right.

In the test kitchen, people were obsessed with these granola bars. They’re healthy and hearty, but they’re not an oat puck — they’re something you really want to eat. As one taster said, “Every time I reach for a granola bar, I’m hoping it will taste like this one.”

They’ll make a wonderfully aromatic addition to your Sunday meal prep routine, and they’re such a handy source of protein, you’ll be thanking yourself all week. We find the 405 is much less gruesome after a granola bar and a milky latte. We’ve also been taking granola bars in our workout bags and fanny packs — they’re the perfect post-pilates, mid-bike ride, or on-the-trail snack.

Our tip: If you’ve got kiddos in the house, make a double batch. It took our kids about five minutes to discover that these granola bars are a) yummy and b) even yummier with a glass of cold milk. They’re good in a lunch bag, and they’re pretty much after-school-snack magic.

3 Tbsp canola oil, plus more for greasing the pan