Impossible Nachos (Made with Impossible™ Burger) 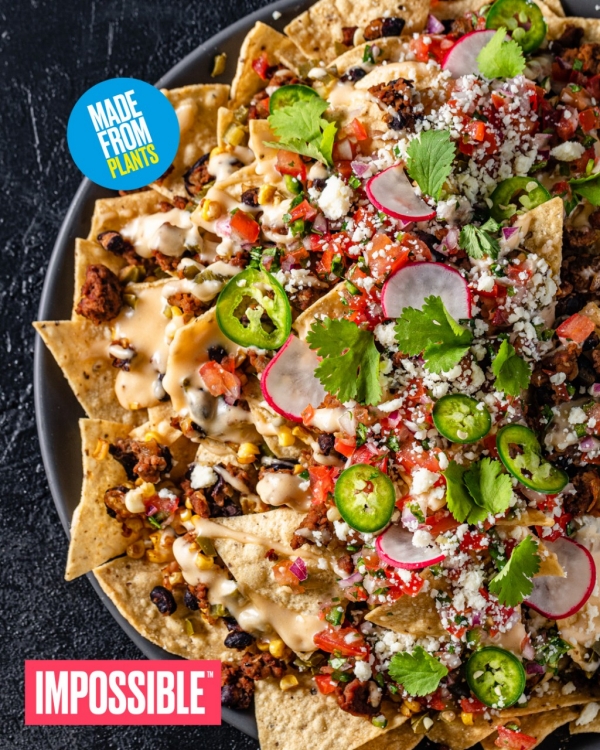 Nachos are a cautionary culinary tale along the lines of “Goldilocks & the Three Bears” — if they’re too dry or too soggy, they’re terrible. And, since they’re definitively a special treat, it’s extra disappointing when they’re bad. This recipe is not that: it’s just right.

In the test kitchen, we went for classic flavors with the Impossible Burger taco meat. The mixture is full of chile powder, oregano, cumin, and a little chipotle pepper for smoke. We slyly added veggie stock to the taco meat to give it some extra juiciness. It gets tossed on the chips with beans, pickled peppers, and corn — cooked in a dry pan, so it’s crisp and charred. Here’s where we went off-road a little bit: Instead of using shredded cheese, we made a creamy queso of cheddar cheese, cream, and adobo sauce. It stays hot longer than melted cheese. We also like how it amplifies the meatiness of the Impossible Burger and balances out all the briny, sweet, crunchy, salty, spice of the toppings in general — and hot damn, a homemade cheese sauce is something special!

It’s a small detail, but our tasters said that their favorite thing about these nachos is the uniformity of the toppings. It helps the queso do its job; it seems to cling to every bean, every kernel of corn, and every bit of the pico de gallo. Plus, it’s easier to scoop out all the goodies and get them into your mouth without a giant tomato trying to steal the show.

For the Impossible Burger taco meat:

For the Impossible Nachos: