A Home Cook’s Guide to Oils 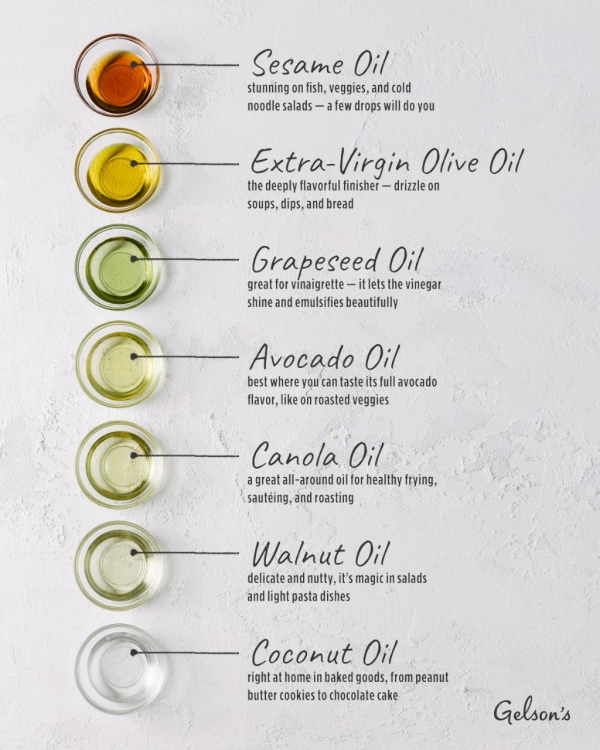 When it comes to cooking oils, we all have our loyalties, especially to extra-virgin olive oil, which is always jostling with the salt cellar and the pepper grinder for pride of place next to the stove. And it’s probably true that a home cook can get by with just a couple cooking oils, but we’d argue that — for the sake of flavor, fun, and good health — a pantry stocked with a handful of oils is not a luxury but a necessity.

Every oil has a purpose, and figuring out that purpose and applying it well can mean the difference between a good dish and a finely tuned, great one. After all, oil is more often than not the first ingredient in the pan and the last one drizzled over the top of a dish. It’s elemental.

With that ideal in mind, we’ve created this guide to most of the oils we carry. You’ll find we’ve looked at not only the color and flavor of the oils, but also their “smoke point,” the temperature at which an oil starts to smoke and burn. It’s important because, when an oil is heated beyond its smoke point, it starts to break down: It becomes burnt, bitter, and foul-tasting, and all its healthful nutrients are incinerated. Sound dramatic? It is, it is! Luckily, it’s also easily avoided — read on!

Sesame oil is so delightful. It ranges in color from golden brown to inky black, but in all its varieties it’s intensely fragrant, and so flavorful — a few drops are enough to infuse a whole dish with its lightly sweet, toasted sesame flavor.

Because it’s so robust, and it has a smoke point of 350º, sesame seed oil is not so much for cooking as for finishing, and it’s especially stunning on fish and vegetables. Toss it on a chiffonade of cabbage, a bowl of tuna poke, or a noodle salad with snow peas, bell peppers, cucumbers, and green onions.

The marvelous thing about extra-virgin olive oil is its variousness. It can be anywhere from golden yellow to the deep green of summer grass, and neither end of the spectrum is better than the other — the color depends on the type of olive and how old it was when it was pressed. And within those variations, it can taste floral, fruity, spicy, buttery, herbal, or nutty. That’s why we carry so many of them!

Extra-virgin olive oil has a smoke point of just 325º. That means it’s not great for roasting or frying. Its rich flavor can be wonderful in cakes and breads, and we use it for lower heat cooking, like braising. But it seems to shine brightest when it’s whirled up in dips, whisked into vinaigrettes, or drizzled over soup. And who doesn’t love to swipe a hunk of bread through a bowl of olive oil steeped in garlic, herbs, and red pepper flakes?

As the name implies, grapeseed oil is extracted from the seeds of grapes — primarily those used in winemaking. It’s a pale, unassuming oil with two fantastic superpowers: Its smoke point is about 420º and it has no flavor. Sound boring? No, no, no.

Grapeseed oil is the one to call on when you need to put a gorgeous sear on rib-eye steak or a sea bass fillet. It’s also wonderful in aiolis and vinaigrettes: It emulsifies like a champ, and it won’t step on your delicate herbs, spices, and flavored vinegars. We sometimes pair it with other, more flavorful oils — either to mellow an olive oil or to stretch a fancy nut oil, while still giving it a chance to shine.

Avocado oil varies in color and flavor. A refined avocado oil will be light green in color and taste mild and buttery, while a cold-pressed, extra-virgin one will be deep, emerald green and have a more complex grassy and mushroom flavor. Both have a crazy high smoke point — about 480º to 520º — so you can use them for just about anything, including high temperature cooking.

But there are other oils better suited to searing and frying. Avocado oil is such flavorful, special stuff, we like to save it for dishes where that flavor can shine, like roasted veggies or a long-cooking white bean and fennel cassoulet. It’s also amazing as a finishing drizzle, especially on pizza.

If you’re only going to have one neutral cooking oil in the house, light yellow canola would be a good candidate. It’s made from the canola plant, a variety of rapeseed that’s very low in erucic acid. It comes with a neutral flavor and a solid smoke point of 400º, which makes it a great all-around oil. You can use it for everything from making vinaigrettes to sautéing and deep-frying.

It’s a healthier option, too. It’s not only low in saturated fats, but also high in Omega-3 fatty acids — a fantastic argument for making a giant batch of french fries. Right now.

Walnut oil is the color of topaz and it has a delicate, nutty flavor that’s lovely in foods. Even if its smoke point wasn’t low — it’s about 320º — you wouldn’t want to sauté or fry with it because the flavor is so soft it will all but disappear with heat.

It’s a natural for vinaigrettes, and pairs especially well with salads that feature beets or fruit. Think endives, pears, and chèvre. It’s also terrific with pasta — warm a little walnut oil up with garlic, salt, and pepper, drizzle it on warm pasta, and finish with Parmesan.

Our tip: If you’re making a lot of vinaigrette, you can blend walnut oil with a neutral oil, like grapeseed or canola, so that you don’t have to use as much of it.

Unlike the other oils in this list, coconut oil is solid and white — until it melts, and then it’s clear. In its refined form, it has a mild, nearly neutral flavor and a higher smoke point (between 350º and 400º), but our chefs recommend using it for medium-heat cooking, like sautéing vegetables and aromatics.

We get a bit more excited about the unrefined or virgin coconut oil because it is such a departure from other cooking oils. It’s lightly sweet and full of bold, coconut flavor, and it has a wonderful aroma. It’s great wherever you want to get a little soft and coconutty, like curried soups, seafood, bitter greens, and perhaps less expected, popcorn. And because of its high fat content, it’s also fantastic in all kinds of baked goods, from granola to brownies.

Our tips for baking with coconut oil: Go with a 1:1 ratio of coconut oil to butter. Make sure you use it in whatever form the recipe calls for, e.g., solid vs. melted. And measure it properly: spoon it into the measuring cup, pack it down, and level it with a butter knife.

Corn oil’s pale yellow color suits it: its flavor is so very light, you’ll only pick up the corn if you really try to taste it. It has a high smoke point (450º) and a low price point, which makes it perfect for filling up the deep-fryer. If you’re going to be doing a lot of frying — donuts, donuts, donuts! — corn oil is your buddy.

Vegetable oil is a blend, and it can have soybean, corn, safflower, and other oils in it. That means its smoke point can be variable, but it’s generally around 400º. Between that and its neutral flavor and smell, it’s a good one for swabbing down baking and roasting pans and for high-heat cooking when you don’t want to add flavor — or use up a fancier oil.

We like to break out the veggie oil for frying seafood, like fried oysters and crispy skinned salmon. It’s also our favorite neutral oil for making popcorn.

Peanut oil’s fair flaxen color belies its big, bold character. It smells nutty, it tastes nutty — and it will impart a pleasant, aromatic nuttiness to anything you cook in it. And with a smoke point of 450º, it doesn’t mind a little heat. That makes it a natural for Asian cuisine, and we use it in everything from bold, spicy stir-fries to delicate shrimp curries. It’s also a great one for deep-frying everything from chicken to pork belly cracklins, crispy tofu, and hush puppies. Basically, it’s good anywhere you want the peanut flavor.

Our tip: peanut oil has a short shelf life, so unless you’re planning to make A LOT of fried chicken, resist the urge to buy a giant jug of it.