A Home Cook’s Guide to Onions 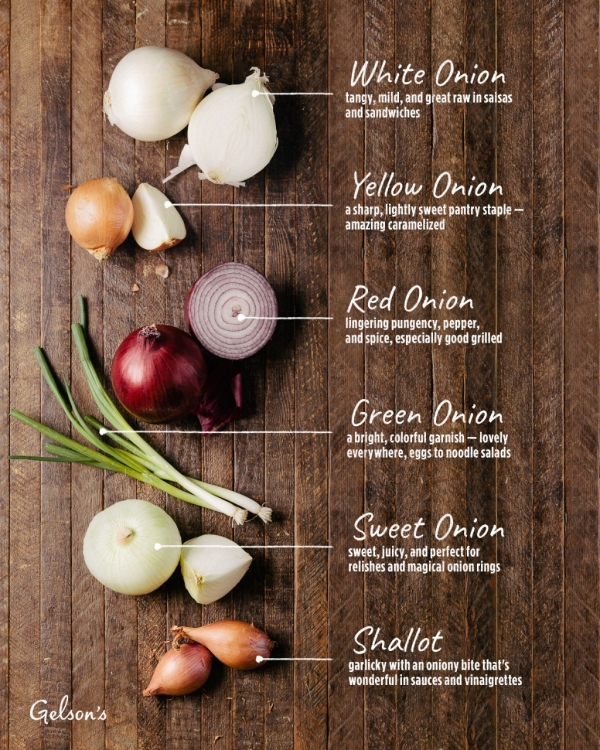 Onions are a home cook’s best friend. In the raw, they give salsas a wonderful bite, burgers extra crunch, baked potatoes a bright green garnish, and cocktails a brilliant pickle. And cooked they’re wildly versatile: They’re the start of nearly every soup, stock, and sauce. They can be a deep-fried appetizer, a skewered, creamed, roasted, or charred side dish — and chopped, minced, sliced, diced, or whole, they can be a flavorful component of the main dish.

And yet, for all that awesomeness, we do tend to take them a little for granted. Sure we keep a few on hand, especially yellow onions, which will always do in a pinch. But onions are as various as their uses, and it’s worth getting to know them, in all their sweet, savory, and pungent varieties. After all, a yellow onion is never going to take a dish down, but is it going to elevate it?

With that in mind, we’ve dug deep into our onion knowledge and put together this guide to some of the more common onions you’ll find in our produce section — consider it our ode to the onion, the humblest and best of the root vegetables.

Yellow Onion
You know this onion: It’s round, and has a pale brown skin, thin as parchment, and white flesh. Its flavor is pungent and sulfury, yet milder and sweeter than some of the other storage onions — even more so when cooked.

When your recipe just says, “onion,” this one’ll do. It’s especially good for caramelizing because it holds up well under long, low heat and develops a deep, buttery sweetness that’s fantastic in everything from mashed potatoes to onion dip.

Sweet Onion (Vidalia, Walla Walla, Bermuda, Maui)
Most sweet varieties look just like the yellow onion, but there are white ones too. They’re less sulfuric than other onions, so they taste sweeter. They’re also juicier, so they don’t store as long; be sure to keep them in the fridge and use them soon after buying.

Their sweet flavor makes them more appealing to people who fear the stronger, more pungent onions, but it would be a shame to waste them in dishes where their sweetness would be masked, and they wouldn’t add much. They’re excellent in the raw, where other onions are overwhelming, like in relishes or salads — and they make positively magic onion rings.

White Onion
The name says it all: They’re a nice, firm, very round, white onion, milder yet than the yellow onion, and a little tangy — their flavor tends to linger less than the red and yellow onions. They’re great raw, and unlike the sweet onion, best in foods where you want to add some bite and tang: chop them into salsa and guacamole or slice them onto burgers and sandwiches.

Cipollini
Cipollini onions come in a range of colors, white to red, and are easy to identify: They looked like someone stepped on them in the garden, they are so flat and squat. They’re smaller, sweeter, and less sharp than storage onions, all of which makes them excellent for eating whole. Try them roasted or grilled on a skewer — they get quite creamy and sweet!

Pearl Onion
The cutest onion of all, pearls look like snack-size versions of the white, yellow, and red onions. They’re sweet and delicate, so they make a splendid side dish or accompaniment. Put them in the bottom of the roasting pan with your potatoes, gratin them in cream and aromatic spices — or, better yet, pickle them for your martinis and charcuterie plates.

Our tip: These wee onions have a reputation for being devilishly hard to peel, but the skins will slide right off if you blanch them for three minutes and then trim the ends.

Red Onion
Red onion’s gorgeous burgundy skin and flesh matches its big flavor: It is the most pungent of all the onions, full of bright, peppery spice that, if eaten raw, lingers long after the meal. Once cooked though, it mellows — while retaining its color and the best of its gumption.

Use red onion where you want real punch and color: sliced and quick-pickled, they’re wonderful on pizzas and green salads. They are also terrific cut into wedges and grilled — they char up splendidly and get sweet and jammy on the inside. Our tip: If you want to eat them raw, but prefer a smidge less bite, put them in a bowl of cold water and refrigerate them overnight.

Shallot
The shallot looks and tastes like the lovechild of garlic and red onion: it’s purple in hue and shaped like a jumbo garlic clove, and its mild flavor has something of garlic’s spice and red onion’s bite. Its layers are thin and tight, so it’s very easy to mince up — plus a flavor that is lovely raw or cooked — which makes it a natural for all kinds of sauces and vinaigrettes.

Green Onion (Scallion)
From the top of its hollow green shoot to the bottom of its bright white, onion-y bulb, the entire green onion is edible. Its bulb has a mild onion flavor, while its green bits have a bit more bite. Their perky good looks, bright flavor, and crunchy texture make them the perfect garnish — sprinkle them over everything from soups to tacos, cold sesame noodles, and scrambled eggs. Also good: green pancakes!

Spring Onion
This onion looks a lot like a green onion, but it’s actually a yellow, white, or red onion that’s been picked very early — when its bulb is still thin-skinned and mellow. Like green onions, the entire onion is edible, and it can be used as a garnish anywhere you’d use a green onions, but it’s also lovely whole. We like spring onions braised in butter, panko-battered and fried, and roasted with nothing but olive oil, salt, and pepper, but they’re especially amazing charred on the grill.

Leeks
Leeks look like terrifically overgrown, very dirty green onion — but unlike the latter, only the white bottoms and the pale green of the tops are edible, and they have a sweet, delicate flavor. Their texture is more woody than other onions, so they have to be sliced very, very thin to be enjoyed raw, like in a salad.

More often than not, we cook them, and they’re wonderful where their subtle flavor can shine: braised as a side dish, chopped into large rounds and baked into bread pudding, in a broth with soba noodles or mussels, and of course, the classic potato-leek soup.

Chives
We have a soft spot for cheerful chives — lithe and bright, spring green, they add a garlicky note and a pop of color everywhere they go. Cooking tends to ruin them, so the best thing is to cut them up into a tiny dice with your kitchen shears and sprinkle them over stuff, everything from baked potatoes to fried eggs, creamy soups, roasted root vegetables, and raw oysters.

Garlic
Bet you didn’t know garlic was in the onion family! It is, and it competes with the red onion for most pungency. When it’s raw and very fresh, it’s so spicy it can almost be hot, but in the pan or oven it becomes more savory and complex — nutty, roasty, and sweet.

Garlic is used in so many dishes, and unlike the onions, it’s a one-off — there’s no subbing something else in for it. That’s why it’s a kitchen staple, like yellow onions. We will say that if you think you don’t like garlic, for its strong, lingering flavor, try roasting it — in the oven, its flavors soften, and it becomes sweet and almost onion-y.