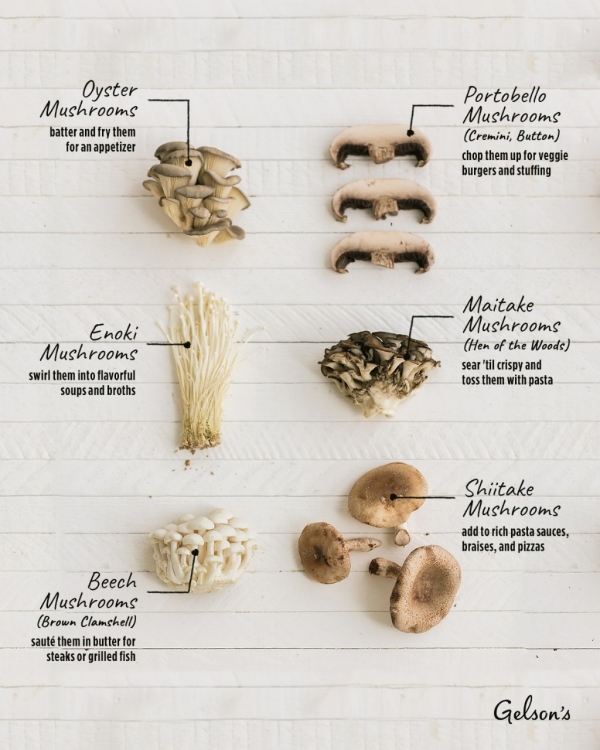 People have strong feelings about mushrooms. We love them unabashedly, but it wasn’t always so. When we were kids, button mushrooms were the only fungus in town. Even if our mothers were inspired cooks and slathered them in butter, garlic, and parsley, they still looked dubious and slimy — and, like kids everywhere, we balked at the idea of eating them.

Luckily, we grew up to be more adventurous eaters because mushrooms are a tasty, tasty fungus and nowadays there’s a thrilling variety of them: rich, crunchy, delicate, earthy, nutty, colorful, and trendily neutral. There are great big mushrooms you can stuff, and slender mushrooms you can drape elegantly across your rice bowl. There are meaty mushrooms, crispy mushrooms, and ruffly can-can mushrooms.

This guide is not only for the mushroom enthusiasts, but also for the mushroom curious, the ones who’ve only just begun to recover from their childhood aversions. We’re so excited for you to explore the world of mushrooms. On that note, stay tuned: Here we’ve covered some of the mushrooms we carry all year round. We’ll be back with the wild and seasonal mushrooms!

Before we get started, a few mushroom tips:

Maitake Mushrooms (Hen of the Woods)

This one is the darling of chefs. It grows in soft brown clusters with its splendid ruffled tops layering over one another. They smell like the earth and they have a rich, meaty flavor — so robust it’s almost gamy. They’re also a nice firm mushroom, which makes them very versatile in cooking.

The maitake is so flavorful, we like to put it front and center. Think sautéed in grapeseed oil ’til its thick pieces are seared and tender, and its delicate ruffles are super crispy, and then tossed with fresh pasta noodles, parsley, red pepper flakes, and Parm. They can also be used in combination with lesser mushrooms (ahem, button) to boost the shroomy-profile of a dish.

Portobellos are brown mushrooms, big as your palm with a lovely swirl of velvety gills under their caps. They turn up on every vegetarian menu. There’s a reason for that: they have a meaty, satisfying texture. This is the mushroom you want to toss on a piping hot barbecue or a dry grill pan and sear — it has a wonderfully rich flavor and tastes fantastic on a bun or in a taco. It’s also great stuffed.

Fun fact: Button and cremini mushrooms are younger portobello mushrooms. As they age, their caps unfurl, they darken, and they gain more flavor. Buttons are a crisp, mild mushroom, which makes them great for eating raw on salads, where they can sop up the dressing. Cremini have a bit more flavor, but they’re hard to sear or crisp, so we like to chop them up small and put them in things, like veggie burgers and stuffings.

With their snowy white caps and long, thin edible stems, enoki mushrooms look delicate and pretty. You can eat them raw for a nice, crunchy texture, but most folks prefer them cooked — they have a soft, noodle-like consistency.

Enokis’ superpower is their mildness, and like tofu, they will absorb the flavors of whatever is around them. We like to swirl them into soups with a nice rich broth, where they act like vermicelli noodles. They’re also great on top of rice bowls. Bibimbap!

Beech mushrooms might be the cutest fungus around. They grow in clumps and have little round caps and long stems — they seem to be peering around at the world. All this adorableness belies a bitter flavor that must be cooked out of them. In the pan, they’re crunchy and have a nutty, almost sweet flavor.

Because they taste so fantastic, we like to sauté beech mushrooms in butter, salt, and pepper (maybe a little parsley), and toss them on top of a steak or grilled fish where they can shine.

Oyster mushrooms grow in soft, cascading white or daffodil yellow caps that unfurl into delicate fans — they look a bit like flower petals. They have a tender, velvety texture, a mildly sweet flavor, and an almost fruity aroma.

Oysters cook very quickly, and they add a lot of flavor to a dish, so we like to use them in stir fries or to give a light cream sauce some flavor. But they’re also amazing lightly battered in panko and fried. Perch them on a rice or noodle bowl, or serve them as a crispy appetizer.

Our tip: Oyster mushrooms are porous, so keep them away from water. No rinsing! Wipe them off with a damp paper towel.

With their wide, flat caps, shiitakes look like little umbrellas. They have a very soft, almost spongy texture (in a good way), and a light, woodsy flavor full of earth and smoke.

They’re another mushroom that cooks quickly and, because of that delicate texture, they don’t need a lot of heat to transform them. That said, their big flavor makes them amazing in rich food, like pasta sauces, braises, and even pizzas. Wherever you use them, add them at the end so they don’t overcook.

Our tip: The stems are too tough for eating, but you can throw them into your stock pot or cooking rice — they’ll add tons of flavor.