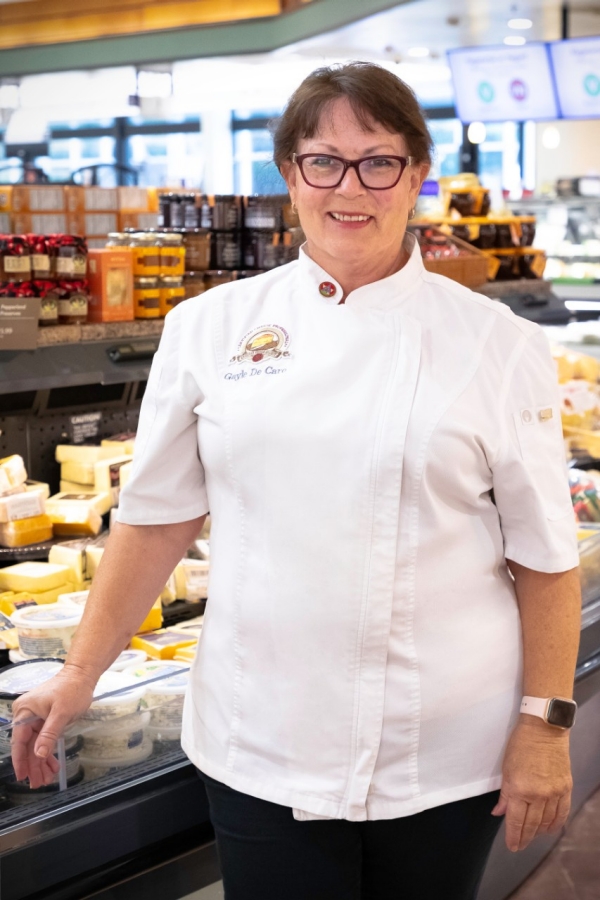 Gayle De Caro first fell in love with cheese on family trips to Wisconsin. She and her husband moved to Iowa early in their marriage, and every fall, they would go apple picking in the neighboring state. “I was so fascinated by all the big mounds of different cheeses at the orchards — I mean, Wisconsin has cheese everywhere,” she laughs. “We’d bring apples and cheese home, and that would get us through the long, hard winter. It became this big tradition, and I’ve transferred a lot of the memories from that time into the passion I feel for my work now.”

Gayle is our category manager of specialty cheese and deli merchandising. She began working at Gelson’s a little over 40 years ago, and after just a few months behind the service deli counter, she jumped at the opportunity to work as a cheesemonger. “I like to be creative with my hands,” she says. “So taking those big wheels and blocks of cheese and cutting them and making them look like something — I just found that very interesting.”

That passion drove her to further her education, both on her own time and behind the counter. She got a Level 2 Award in wine certification from the Wine & Spirit Education Trust so she could provide customers with expert wine and cheese pairings. And in 2013, she took the American Cheese Society’s Certified Cheese Professional® exam (think: the bar exam of cheese), which requires 4,000 hours of professional, cheese-only experience. Only 200 or so people in all of North America qualify to take the exam each year, and since it was first offered in 2012, fewer than 1,000 people have passed. For nine months, Gayle furiously studied the biology and chemistry of cheese, food safety regulations, the cheesemaking process, pricing, the lactation cycles of cows, sheep, and goats — and the list goes on. “I had flash cards with me everywhere, and then I would go to cheese shops in my free time to taste,” she says. “I was so nervous because it was so intense.”

Spoiler alert: she passed. Since then, Gayle has used her expertise not only to help three of her teammates pass the exam, but also to ensure that all of Gelson’s cheesemongers are knowledgeable in their craft. “We have a lot of people who come in from other stores or from our vendors who can’t believe how educated and put-together our employees are.”

Today, Gayle still finds ways to continue learning, especially when it comes to industry trends. Last year, she helped create a display of new cheese trends for the annual International Dairy Deli Bakery Association trade show. She’s also president of the California Cheese and Butter Association and a member of the New World Chapter of the Guilde Internationale de Fromagers — an organization based in France whose mission is to promote cheese and the men and women who make it, as well as dairy farmers and retailers.

Thanks to these extracurriculars, Gayle has great relationships with vendors and cheesemakers, like Jill Giacomini-Basch, Lynn Giacomini-Stray, and Diana Giacomini-Hagan, the sisters who own Point Reyes Farmstead Cheese Co. She ran into them at the Fancy Food Show this past year, and they asked her to give feedback on “Project X,” a soft-ripened, bloomy rind cheese they were developing. “That’s the second time they’ve asked me to preview their cheese before actually releasing it,” she says. “Now it’s fully developed, it’s really good, and I’m just so excited that they picked Gelson’s to be first to market with it.”

Gayle has been anxious to tell customers about this secret project, and not just because of her personal connection to it. She’s also very fond of the company’s story: About 20 years ago, these three sisters turned their fourth-generation family dairy farm, which overlooks Tomales Bay, into a sustainable cheesemaking outlet that’s now known for its wheels of classic-style blue cheese — the only one made in California. They’ve been venturing into other styles of cheese with some limited releases, hence “Project X,” which has a name now, Quinta. It’s wrapped in spruce bark, and Gayle says it’s like a super runny Brie, but with a woodsier taste.

Another cheese she loves recommending to people is Reading, a semi-soft raclette made by Spring Brook Farm Cheese in Vermont, which operates in support of the Farms for City Kids Foundation. “Every summer they bring a total of around 700 inner-city children to the farm for a week at a time, and they teach them how to milk a cow and how to make cheese,” she says. “The week is totally funded by their sales. And the cheese is really great! But it’s got a great story, too.”

For Gayle, cheese (and all food, for that matter) is part of an experience — so it’s never just about recommending a fantastically creamy Camembert or a particularly nutty Asiago. It’s about sharing the stories and memories behind the cheese so people can feel a connection to what they’re eating. “I get pretty passionate because part of it is the story that you fall for,” she says. “Cheese is truly a labor of love.”

Unfortunately, the Covid-19 pandemic has limited Gayle’s opportunities to share these sorts of tales with customers. She’s noticed that people don’t linger at the counter to chat like they normally would — they take their cheese and move on. “We make these great grab-and-go cheese plates in all different types and formats,” she says. “So people can still treat themselves to all their favorite cheeses, but you miss that interaction a little bit. People aren’t as ready to talk to you.”

The pandemic has also made it unsafe to hand out samples. However, she and her team are working on a solution that’ll allow customers to safely try cheese before they buy it — especially ones that are new to Gelson’s. “I believe that people should be able to taste things,” she says. “So we’re going to cut small pieces and wrap them or put them in little 2-ounce cups with lids so customers can take them home to sample.”

And thank goodness too because, in these difficult times, we all need little bites of cheese here and there to help lift our spirits. “People tell me all the time that cheese makes them happy — but what a lot of people don’t know is that there’s actually a scientific reason why,” Gayle says. “Cheese contains an amino acid called tyrosine that makes us feel content, and the fat encourages the brain to produce dopamine. It actually does make you feel really, really good!”