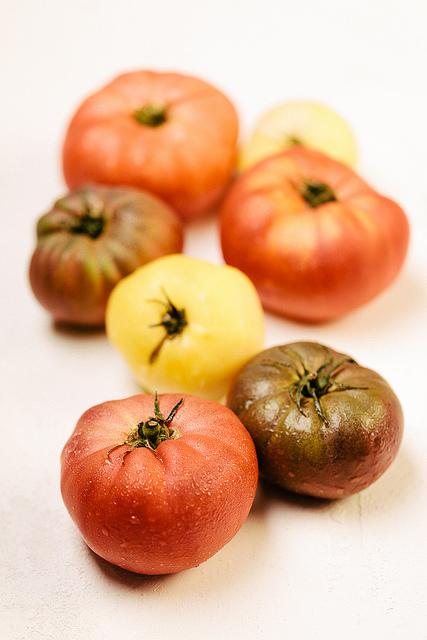 Bill Brammer at Be Wise Ranch is great to talk to about organic heirloom tomatoes. He and his family have had their organic farm since 1977, and he helped write the federal laws for organic certification — so he’s something of an organics pioneer.

Be Wise Ranch has two locations: The main farm in Escondido, and another along the San Diego coast, in the Santa Fe Valley. “San Diego is a great place to grow tomatoes,” Bill says. “It seldom rains in the summer, which helps control cracking and disease in the tomato, and the nights are nice and cool.” Tomato plants are less fertile when the temperatures climb into the 90s, so a moderate climate is a good thing.

“I’ve also been improving the soil for 40 years,” he adds, “which balances the nutrition of the plants, so we don’t have to treat for very many insects and the flavor of the fruit is more balanced.”

Be Wise Ranch grows what Bill calls “fresh eating” heirloom tomatoes, rather than the kind folks might use for paste. “We fiddle with the varieties a lot,” Bill says. “In part because, unlike conventional tomatoes, there’s no breeding, people are just saving seeds — some of them handle disease pressure well, and others stop growing.”

When it comes to shopping heirloom varieties, color can tell you a lot about what to expect from the flavor. Bill’s wife, Marsanne, gave us this helpful rule of thumb: “ A lot of the time, the lighter the tomato, the less acid it has — and less acid means a sweeter tomato.”

In terms of the more common heirloom tomatoes, she explained, there’s a spectrum: On the sweeter end, the yellow tomatoes with pink stripes. In the middle, Brandywines, which are red with a yellow bloom and offer a nice balance of acid and sugar. And then, last but not least, the tomatoes that are purple-black or dark red with green stripes, which tend to have a rich flavor that’s deeply sweet yet full of acid.

Are there tomatoes that fall out of this pattern? Maybe green tomatoes, which have a lime-y citrus flavor, Marsanne says.

Her advice for shoppers? “Keep a close eye on your heirlooms,” she says. “Conventional shipping or slicing tomatoes, as we call them, are bred to sit on the shelf, so they last longer. Heirlooms are not — so don’t let them sit, eat them more quickly than you would a conventional.”

Not a problem! Heirloom tomatoes are so flavorful, we’re happy to eat them plain — or with a sprinkling of fresh basil.