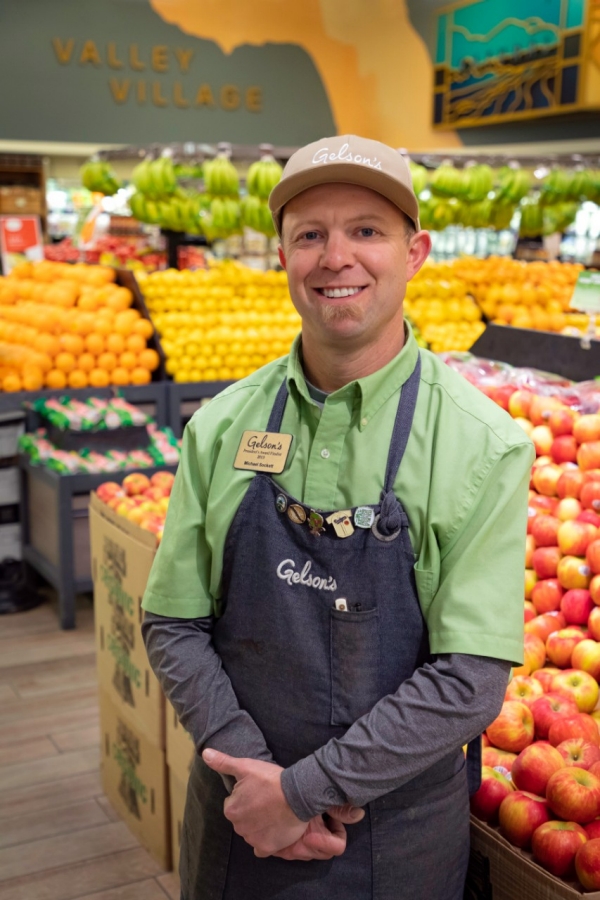 Mike Sockett is the produce manager at our Valley Village store. He likes his job, he told us, because it’s full of interesting challenges. “The produce manager is like the MacGyver of the store. I’m always fixing things, building new displays, or moving existing displays to new parts of the store. You have to have good hands, and a strong memory is key — there are over 500 items in our produce department.”

He also likes that every day is different. We talked to him at 9 a.m. on a Thursday morning, and he’d been at work for hours. He’d already taken in the day’s order, broken it down, and organized it in the back room. He’d spent some time culling — taking all the bruised, scraped, and cut produce off the display, and filling the holes with fresh fruits and veggies. “I want every item, every section, full and looking good,” he said. “Culling gives me a good sense of what I need to order. Produce is a hundred percent perishable, so we’ve always got fresh stuff coming in the next day.”

If the produce is only lightly marked, Mike will give it to one of the other departments, so it can be washed, trimmed, and used in a deli salad, smoothie, or sandwich. Gelson’s Valley Village store donates the more damaged produce to Colfax Elementary School. “They have a little farm over there,” he said, “and they’ll feed our lettuce trimmings, bendy carrots, and corn cobs to their livestock.”

Mike also spends a lot of his day talking with customers, cutting samples, and helping folks figure out what to take home to their family. “With Gelson’s, the produce and vegetables are so good, you feel proud,” he said. “You know people are going to take it home, and their family or their friends are going to say, ‘Dang, where’d you get that?’ It’s always fun to sell something you love.”

Mike said that the industry in general is changing the way they deliver fresh vegetables, and more and more supermarkets are selling precut, prepackaged vegetables. “At Gelson’s, we still carry all the veggies in bulk because our customers want to prep it themselves, and we have stuff that you can’t find at other supermarkets, like rapini, escarole, and endive. A lot of private chefs shop here, and they’ll say, ‘Oh wow, I don’t have to go to the farmer’s market.’”

Another thing that sets the Gelson’s produce department apart is the fact that they work directly with farmers. “We don’t have a giant warehouse somewhere full of produce,” Mike said. “Our farmers will keep it for as long as possible, so you get the full flavor of the tree or vine, and then ship it to us.

For example, Australian mangoes are picked ripe from the trees and flown straight to Gelson’s — a 13-hour flight. He says they taste amazing: They’re not as fibrous as some mangoes, so they have a wonderfully creamy texture, and they’re very sweet and flavorful. “No one else in SoCal has these mangoes,” Mike said. “They cost around $8 dollars a piece, so people are always a little reluctant to buy them, but once I give them a sample, they’re like, okay, and they buy three. They can’t wait to share them with their family.”

“That’s what makes our produce so special,” he added. “It’s truly fresh. We have to pay a little more for that, but it’s worth it because our customers get something they’re really going to love. It’s a great experience.”

We asked Mike what else is fun and in season right now, and without missing a beat, he answered, “Pears.” Most of us love eating pears, but they’re also the epitome of what’s tricky about picking out a piece of fruit — it can be so hard to find one that’s just right, not too firm, not too ripe. Turns out, we’ve been going about it all wrong. Mike gave us some advice, using a Comice pear as the example: If you’re not going to use it for a few days, go ahead and buy an unripe green one. Store it upright, on its wide end, at room temperature for a couple of days until it ripens. How do you know it’s ready? A ripe Comice will turn golden yellow and give a little, like a ripe avocado, when you squeeze it. (Gently, please!) “The mistake a lot of people make with fruit is to store it in a bowl,” he said. “If you do that, the fruit will soften and bruise on the sides where it’s touching other pieces of fruit. It will also ripen faster.”

“Some people like a firmer pear because it’s nice for a salad; some like it a little softer for eating,” Mike added, thoughtfully. “There are just so many ways to slice a pear.”

As the interview winds down, we have just one more question for Mike: What did he mean, up above, about good hands? “In produce, everything comes down to your hands,” he answered. “When you’re stacking apples or oranges, you wanna be fast and you want to hold onto the fruit — like a baseball player moving the ball from hand to hand, effortless. People say, we build it, and customers come and tear it down. No, if you have good hands, that stack won’t come down.”

He paused for a beat, and then he said: “That’s what’s so satisfying about this job. You’re so busy all day, and it goes so fast. But the main thing you’re trying to do is make the produce department look full and organized before you leave, and when you look back at it and say, ‘Wow, that looks great,’ it’s truly satisfying, and you can have a lot of pride in what you do.”