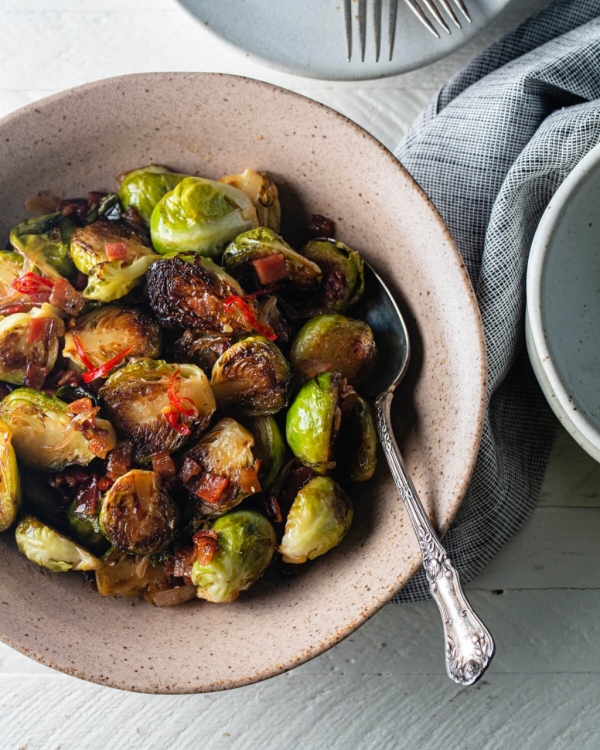 It has been wonderful to watch Brussels sprouts take the food scene by storm. Seared to a crisp and coated in all kinds of bright, spicy sauces, they’re the new Buffalo wings. We don’t mind at all: a few savory sprouts are every bit as satisfying as their meatier counterparts, and they pair beautifully with a nice, fall bourbon drink. Plus, we feel a little healthier eating them — even if they’re slathered in sauce.

For this recipe, we fry up a bunch of bacon, and then sear the Brussels sprouts in the bacon fat. The sprouts are halved, and they crisp up beautifully on the cut side. They get tossed in a piquant combination of chile peppers, garlic, sherry vinegar, maple syrup, and honey. The taste is so luxe: spicy-sweet, bright, toasty, slightly smoky, and so rich. It’s almost impossible to stop eating them.

We’d definitely bring these Brussels sprouts to a tiny, socially distant Friendsgiving as an appetizer. They’d also be a welcome zippy note served alongside the turkey at your family’s table. Yes, the Brussels sprout used to be controversial, but it’s not anymore — isn’t it about time you invited it home for the holidays?