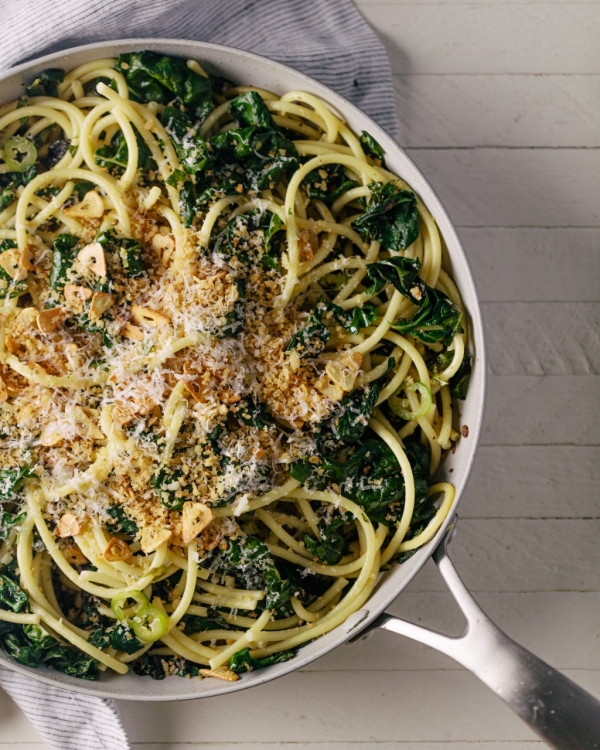 A bowl of bucatini pasta tossed with Swiss chard — it sounds humble, it looks very simple, but we’re here to tell you that this recipe is astonishingly flavorful. It’s made with a classic Italian combination of olive oil, garlic, anchovies, and chiles, so it reminds us a bit of a deconstructed bagna cauda, and yet it’s very much its own thing.

First, there are the panko breadcrumbs. We sauté slivers of garlic in olive oil ‘til the garlic is soft and starting to crisp, and the oil is perfumed with it — and then we use that oil to toast the panko. The anchovies are also warmed in olive oil, where they dissolve into a mellow umami-filled paste. To that, we add the chiles and the chard, which wilts into silky piles. The final dish is a chewy pasta, rich and spicy chard, a few sprigs of mint, a bright pop of lemon zest, a little salty pecorino, and then the crispy, garlicky breadcrumbs.

It’s such a knockout dish, you could make it for a special night, but we like it for the quieter nights at home. It’s the quintessential one-bowl meal, meant to be inhaled (you won’t be able to help yourself, it’s that good) as you sit in yoga pants and bare feet, sipping wine and watching a movie.