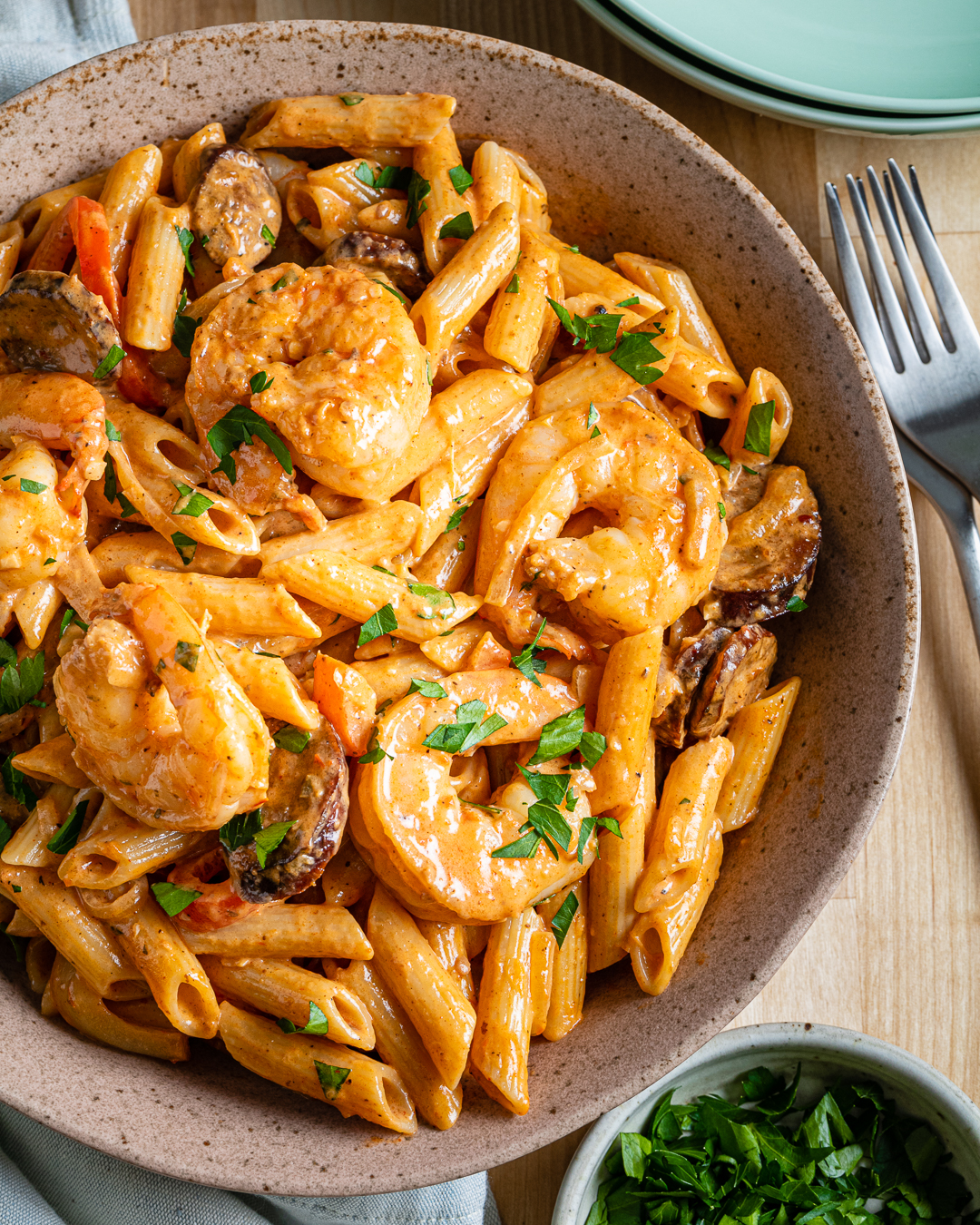 In the test kitchen, we have an enormous amount of love and respect for Cajun cuisine. In part because it combines the ingredients of the Southern Louisiana bayous and coastal regions with a hybrid of West African, French, Spanish, Creole, and Indigenous cooking techniques. But also because it’s comforting, hearty, and full of flavor and spice. This creamy, Cajun-inspired pasta has filling, feel-good ingredients like sautéed shrimp and andouille sausage — and naturally, it relies heavily on Cajun seasoning.

Like many spice blends, the exact contents of Cajun seasoning will vary depending on whose kitchen you’re standing in. It might include garlic, onion, black pepper, mustard, celery, and ground chiles, such as paprika or cayenne — but in general, it’s bold, warm, and zesty. While you could certainly whip up a homemade Cajun seasoning, we opted for a premade version and added a bit of dried oregano for a hint of earthiness.

We use the seasoning to coat the sautéed shrimp. The hot pan toasts the ground chiles in the blend, giving the shellfish a roasty depth. Once the shrimp is cooked through, we brown the andouille in the same pan to enhance its famously spicy, smoky flavor.

The Cajun seasoning also makes an appearance in the tomato-cream sauce, along with yellow onion, red bell pepper, garlic, Parmesan cheese, and a little brown sugar. It’s so rich and tangy — the perfect balance of tomatoes and cream — with an absolutely irresistible kick. And it clings to the shrimp, sausage, and penne marvelously.

We finish the pasta with a scattering of fresh parsley, another hallmark of Cajun cooking, for a touch of bright herbaceousness. Not only is it a hearty, flavorful dish, it’s well-rounded in terms of texture, too. The al dente penne, the tender shrimp, and (our favorite) the chewy sausage — it’s the perfect forkful. We’d eat this pasta every day if we could, with a few dashes of Louisiana hot sauce here, a few dashes there, and a glass of crisp white wine to tame that spicy tingle.

Recipe source: What’s in the Pan?