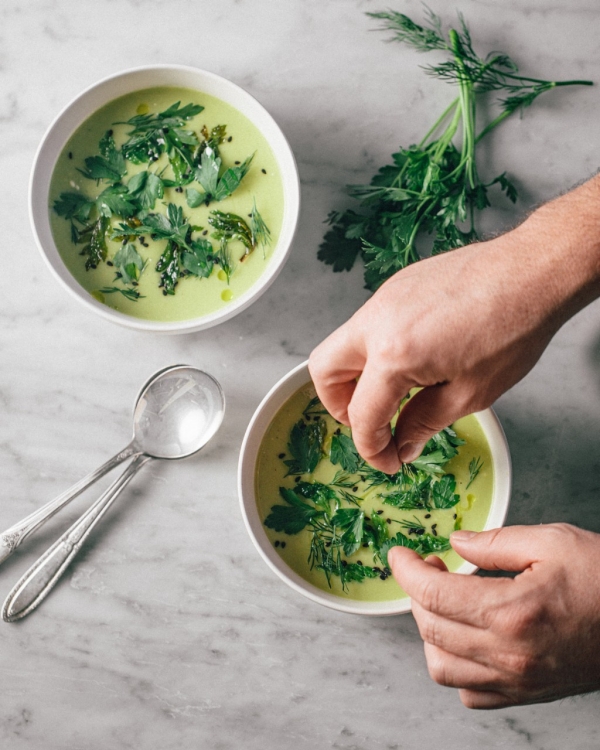 Poor, humble celery must be the most underrated vegetable on the planet. It’s chopped into every mirepoix, sofrito, and holy trinity — the very soul of some of our most celebrated soups, sauces, and stews. It plays the log in every production of “Ants on a Log.” It’s the glorified swizzle stick in our Bloody Marys, and the crunchy scoop for all manner of dips. Isn’t it about time we gave celery its very own show?

Celery soup might just be its star turn! It’s a purée of garlic, potatoes, veggie broth, a handful of herbs and spices, and a whopping six cups of celery. We swirl a little sour cream through it, too. Take a bite, and it has a wonderfully lush texture — thick and light at once. The flavor is full of celery, of course, but here it’s super aromatic. We love the soup’s spiciness: there’s cayenne and black pepper in it, but what comes through is the peppercorn’s pungency, the perfect complement to the soup’s warm savoriness.

All of our tasters gushed over this soup. One was even heard to say, “It’s drinkable good. I am drinking it.” It’s also fantastic for dunking. In the test kitchen, we paired it with big slices of freshly baked Dutch oven pumpkin bread — its mild, pumpkin sweetness, toasty nuts, and fall spices were just perfect with the peppery soup.