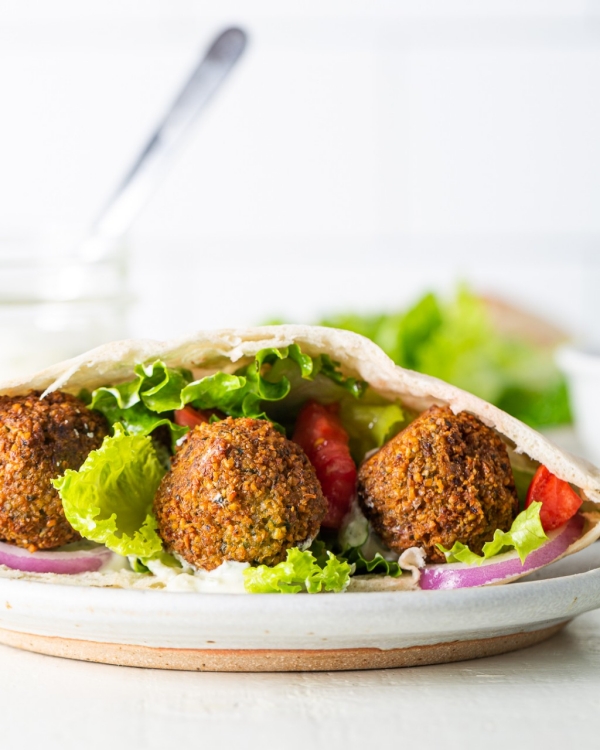 Falafel is one of the take-out foods we’ve missed in the pandemic — those little fried balls are so comforting. From a distance, falafel seems tricky and even a little mysterious. (Ground up dried chickpeas?) But in fact, it’s as straightforward and easy as can be. And that’s wonderful because you really can’t beat fresh falafel piping hot out of the pan.

If you peruse the internets, there are plenty of falafel recipes that use canned chickpeas. But in the test kitchen, we found that dried chickpeas yielded lighter, fluffier balls. The dried are also very easy to work with: just soak the chickpeas overnight, and then you can throw them in the food processor like you would canned chickpeas. We whirled ours up with all the C spices — coriander, cumin, cayenne, and cardamom — as well as fresh parsley, cilantro and garlic. They’re aromatic before you even get them in the oil.

We fried ours in just ½ inch of oil. They’re more like latkes or fish cakes than donuts or fried chicken — and we had them all golden brown and crispy in 10 minutes. They were perfect too: super crispy and crunchy on the outside, and soft and fluffy on the inside. They’re interior is bright green and full of herby, nutty, lemony flavor. Irresistible!

Of course, falafel is all about the accoutrements. So the thing to do is to pop them in a warm pita bread with a bunch of goodies. (Double points if you make the pita yourself. It’s easier than you think.) We like our falafel sandwiches with a healthy dollop of tzatziki sauce, a squeeze of lemon, and some thinly sliced red onion, chopped tomatoes, and lettuce.

Our tip: Go ahead and make a double batch and freeze half of them. In a week or so, when you’re low on groceries or motivation, you’ll be so darn pleased with yourself.