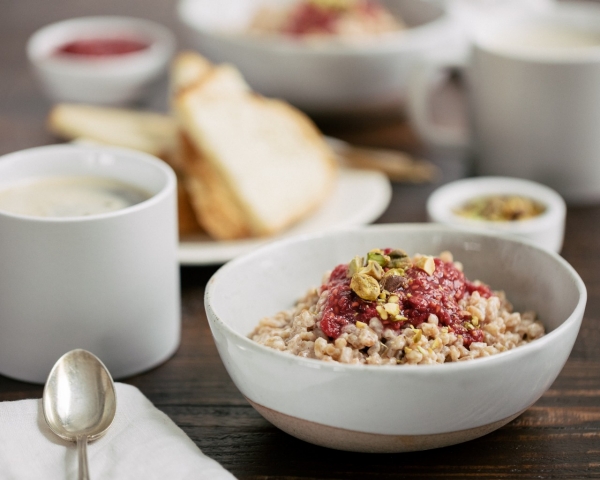 We like a little texture at breakfast, so farro is our friend. It’s just as warm and comforting as oatmeal or Cream of Wheat, but chewier. It’s like a super nutty, jumbo grain of rice. Add warm, honey-sweetened raspberries, crunchy pistachios, and creamy, cinnamon-laced yogurt, and it’s pretty much a flavor and texture fandango. And who doesn’t want to start the day out dancing?

Farro porridge, especially with the warm berries, is a great weekend meal — make it before you go out for a hike or before a long day of hanging out with a book and your favorite chair.

Our tip: This can be a fun breakfast to make for the kiddos, too. We like to whip up a big bowl of the porridge and the cinnamon yogurt and set up a kind of breakfast buffet with the warm raspberries, a homemade jam or apple butter, and a variety of chopped nuts. Our kids love sprinkling all the goodies on their farro.