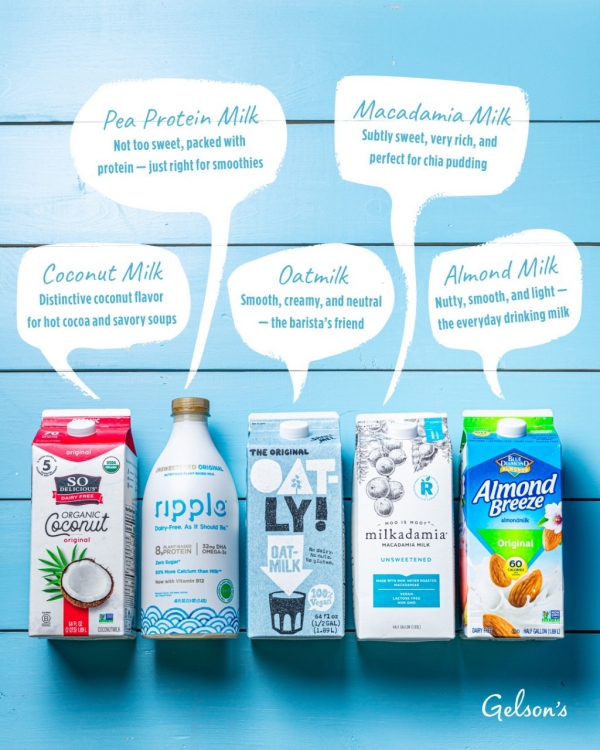 It seems like just yesterday that alt milk was simply called soy milk — because that was pretty much the only option available. Back then, even soy milk was much less ubiquitous (yes, little Timmy, there was a time before soy lattes), and folks only drank it if they were vegan or allergic to cow’s milk. We’ve come such a long way!

It’s not a stretch to say that we are living through the golden age of alt milks, a veritable explosion of delicious plant-based options, from hemp to oats and almonds to hazelnuts. And though we’re still swapping alt milks in for dairy because of allergies and dietary preferences, lots of people are choosing to drink plant-based milks for environmental reasons — and because they taste amazing.

Like all new and trending ingredients, alt milks are fun to experiment with, and we’ve been doing our fair share of it in the test kitchen. Here are some notes on a few of our most popular (and most useful) alt milks.

There are two kinds of coconut milk: Canned coconut milk is used for cooking and baking. Here, we’re talking about the stuff that comes in a carton — and pours like milk. It has a distinctive coconut flavor, which is (if you love coconut) its super power.

Coconut milk lends itself well to both sweet and savory cooking projects. On the sweet side, it’s excellent in chocolaty drinks, like mochas and chocolate milks — it steams up thick and creamy. We love it in cakes and pancake batter too. And like its canned cousin, coconut milk is a natural in puréed squash soups and curries. It’s lighter, both in texture and flavor, so it gives the other ingredients room to shine. We recently used it in carrot-ginger soup to wonderful effect.

If you worry about the nutritional value of alt milks, pea protein milk is your friend. Like most plant-based milks, it’s fortified with vitamin D and calcium, but it’s got them all beat for protein — a whopping 8 grams per cup. It’s also one of the more neutral milks around: it tastes faintly like a protein shake, and it’s not at all sweet. And, it’s higher in fat (4.5 grams per cup), so it has a thicker texture than most other alt milks.

Pea protein is a shoe-in for high-protein breakfast smoothies, but we think its best application is in savory soups and sauces, where it thickens like milk without adding any flavor. We used it to make a bright, zippy avocado cream for vegan enchiladas — the sauce stole the show, and it was so rich and creamy, no one missed the dairy at all.

There are many reasons why oatmilk is the darling of the alt milk scene: As long as it’s made in a gluten-free, nut-free facility, most people can drink it. It has a very subtle cereal flavor that all but disappears in food. And it has a starchy richness — it’s creamy, but not heavy.

Baristas love oatmilk because it’s very smooth, it makes a rich, wet foam, and it doesn’t monkey with the flavor of the coffee. With summer coming on, it’s the one we’ll be using in our cold brew frappuccinos. It also makes a great everyday milk — pour it over cereal, add it to light cream soups, and stir it into your mashed potatoes.

We consider macadamia nut milk to be the new frontier of nut milks. It’s very fragrant, almost perfumy with macadamia, but it has a subtle, lightly sweet flavor. The macadamia is a rich, fatty nut, and so is the milk — it’s got 4.5 grams of fat. That makes it very lush and thick — an absolute delight.

This is the alt milk we like to swirl into our afternoon iced coffee, the one that’s half treat, half pick-me-up — no sugar needed, and it’s nut heaven with a dark, roasty coffee. Similarly, it’ll give your morning smoothie a wonderful texture (and a ton of B12). It’s also fantastic in puddings, chia and otherwise.

Almond milk, as you might expect, has a very pleasant, mildly nutty flavor. And though we’d definitely say that it’s creamy, it’s also nice and light, which makes it great for drinking. It’s our go-to when we want a tall, refreshing glass of milk — whether it’s plain, chocolate, or vanilla.

That light quality also makes almond milk great in cereals, like our quinoa breakfast bowl, where its nuttiness is an addition rather than a distraction. We also like those almond notes in espresso drinks: try it in a honey lavender cold-brew latte. And of course, it’s a natural in baking — think quick biscuits slathered in honey butter or brownies.