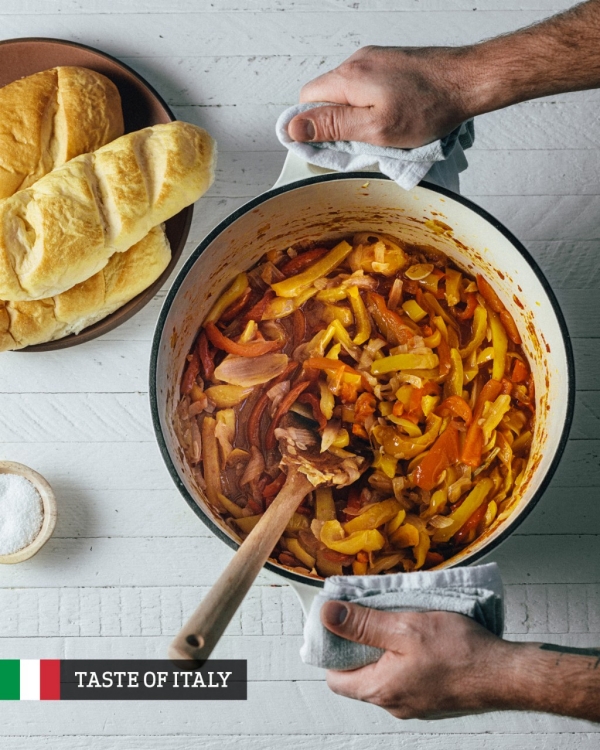 The only thing we like better than eating peperonata is saying peperonata — it rolls off the tongue like Figaro, Figaro, Figaro. And yet, for such a long and lilting name, the dish itself is a rather humble concoction of bell peppers, tomatoes, garlic, and onions. In fact, a test kitchen bystander said, “Is it just a bunch of sliced peppers?”

An hour later, she was singing a different tune. As the peppers and aromatics cooked down, they became silky-soft, and so rich and flavorful. Their savory-sweet steam wafted out of the test kitchen and brought our bystander back. This time, she had a fork. “It smells so good, it’s like a warm hug,” she said. “I just want to hang around while it cooks. How about if I taste a pepper or two, you know, just to make sure they’re good?”

Trust us, they are very good — and once you have a jar, you’ll want to put them on everything. They’re terrific layered into a meatball sub or a roasted veggie sandwich. You can also spread them over homemade pizza. (Think salami, basil, and big islands of mozzarella). In fact, they’re so fantastic with cheese, we sometimes put a bowl of them on a cheeseboard. They’d be just the thing on our Italian cheeseboard.