Hole-y moley! It's easy to identify the iconic Swiss with its distinctive look, buttery smoothness, and slightly nutty flavor. Swiss cheese is a cow's milk cheese made with a mixture of bacteria. How does it get its distinctive look? As the bacteria break down the lactic acid in the cheese, they generate carbon dioxide, creating bubbles in the cheese as it ages, forming holes in the cheese. The longer the cheese ages, the bigger the holes and the more intricate the flavor gets. This rindless delicacy will be a hit on any cheeseboard, your favorite sandwich, or a tasty dash to a dish.

How Swiss is Made

Swiss cheese is made like many kinds of cheese that you love. Raw cow's milk is heated to 90°F. Once heated, lactic acid bacteria and rennet are stirred into the milk, thickening or curdling the milk. Then a cheese harp is used to cut the curds into tiny cubes. As the mix is heated, the bacteria grow, producing carbon dioxide. The heat is increased to 120°F, and the milk continues to be stirred. Cheesecloth is used to move the heated curds into a mold. The cheese is then put into a brine bath. This process removes lactose and adds flavor. Then the cheese is stored, so the aging process or the "affinage" begins. Aging transforms the texture and intensifies the flavor. Traditional Swiss is usually ready to eat after four months.

Baby Swiss only ages for about a month, while traditional Swiss cheese ages two months to many years. Because of that, Baby Swiss is creamy, nutty, and great for melting. Baby Swiss is also produced in smaller wheels and has a more consistent texture with smaller holes.

For many, Swiss Cheese was synonymous with Switzerland. Though cheese is an essential part of Swiss culture, the history of cheese, particularly Swiss Cheese, and its significance in Switzerland remains unclear.

According to history, as early as 1300, a cheese similar to modern Swiss was produced in Emmental. However, in the 1800s the first cheese dairies came into existence. The first factory for the industrial production of cheese opened in Switzerland in 1815, but large-scale production first found real success in the United States. Jesse Williams, a dairy farmer from Rome, New York, started making cheese in an assembly-line fashion using the milk from neighboring farms in 1851.

The 1860s saw the beginnings of mass-produced rennet, and by the turn of the century, scientists were producing pure microbial cultures. Before then, bacteria in cheesemaking had come from the environment or from recycling an earlier batch's whey. Pure cultures mean that more standardized cheese could be produced. Factory-made cheese overtook traditional cheesemaking in the World War II era, and factories have been the source of most cheese in America and Europe ever since.

The traditional way to eat Swiss cheese is with fresh fruit and chutney. It has less salt than other cheeses, so it pairs perfectly with pretzels, salted nuts, and cured meats, like saucisson sec or prosciutto. Since it has excellent melting properties, it is ideal for fondues, soufflés, quiches, burgers, or omelets.

Drinks that pair well with Swiss cheese include rich and malty beer, like a doppelbock or amber ale; a crisp, dry white; a Gewürztraminer or a Riesling adds a refreshing flavor combo. Sweeter spirits balance the nuttiness of the cheese. 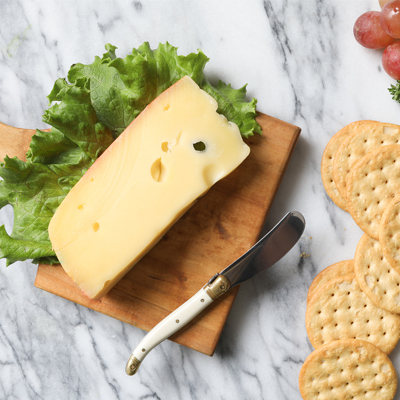 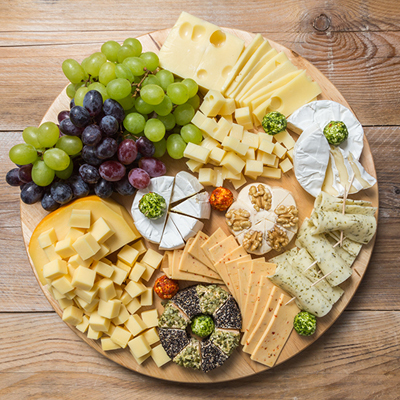 The Cheesy Sunny Side Up Croissant with Jarlsberg®